May 14, 2015
I feel like such a contradiction sometimes.  I am very attracted to the idea of a very frugal, minimalist lifestyle.  But only in theory.  Because when I actually attempt to consider what life would be like without:

– vacations that include flights/hotel stays — not all the time, but at least once yearly and maybe a weekend trip here and there

– the ability to order takeout at times

– the ability to stream the TV shows we like (we did cancel cable, but have Sling, HBONow, and Netflix — still cheaper, but not free)
– the occasional (like, every few months) massage/spa service (pedicure)
– buying books from time to time (though I need to make better use of the library)

. . . I can’t imagine giving these things up. If I’m being honest with myself, it’s pretty clear: I don’t want to give them up.

On the other hand, I could live forever without a luxury car (I just need mine to be safe, reliable and fuel-efficient).  I will happily live in a house filled with aging IKEA furniture, as long as it is clean and in working order and not cluttered.  Many of the things I do with the kids on weekends are free (playgrounds, hanging out with relatives, etc) — though I also like the freedom to hit the zoo or museum if the mood is right.

I don’t know.  I love the idea of stoicism that Trent writes about in this post.  I read about aggressive retirement savings plans (ours is currently . . . not).  But I have a hard time defining exactly what our goals are, or should be.  This came up in part because I was thinking about the potential $$$ that would be associated with a Thursday night “off”.  I’d also loooooove to eventually change our work schedules so that Josh and I take weekend call at the same time, with childcare.  This would mean we’d have many more weekends OFF TOGETHER, which I feel are sorely lacking (which makes me wonder what the point of all this work is, anyway?).  But of course again — it’s a cost.  The reality is that we’d have to give something else up, or save less (not a good idea), or earn more (where’s my book deal?). 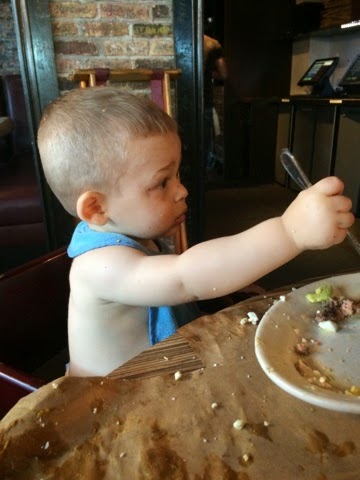 Taken at a recent dinner out.  Don’t even ask …
Share