October 24, 2016
Date nights are fantastic.  But date weekends are really something special.  We try to do one at least once a year, and this year was a double bonus because we took a mid-week trip to celebrate our 10th anniversary, too.  When Josh announced that he had a conference*, I immediately announced I’M COMING TOO.  I had never been to Austin and always wanted to go!  Plus we had some friends there, so . . what a perfect excuse?
I flew direct on Friday afternoon and we returned home Sunday at 3pm.  Yes it was short, but it still felt rejuvenating — like a significant getaway!  It was just enough time away from A&C to miss them and to cleanse the palate from work.  We ate (everything!), talked, read, and slept in.  I highly recommend trying to figure out a date weekend to anyone with young kids.  It doesn’t have to be long to feel meaningful!
Highlights:
Friday:
Okay, so before I left I enjoyed a long leisurely run along the boardwalk.  Not officially part of the trip, but a lovely kickoff!   I then frantically finished a dozen notes at the airport before getting on board.  I read Here I Am the entire way and ended up finishing it on the trip.  Such a raw, emotional, and thought provoking book.
Josh finished up at his conference, got our rental car and met me at the airport!  We headed to visit with friends (hi M 🙂 ) and then to check into our inn (La Villa Vista, recommend as long as you don’t mind being outside the city – we were limited due to huge price hikes due to F1 race weekend coinciding with the conference). 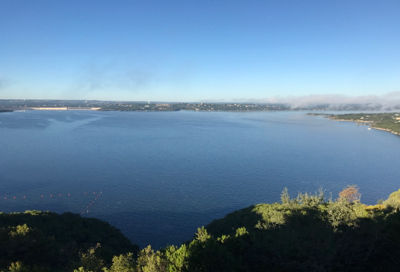 View from our window!
Figuring we’d be pretty spent and based on recommendations from a friend, we planned on a nice dinner near the hotel at Steiner Steakhouse.  It was decadent and delicious and I was charmed seeing men dining in cowboy hats without a whiff of irony.
Saturday:
We slept in for what felt like forever, but made it up in time for breakfast at our inn (served at 9 am or 10 am EST!).  We then promptly headed out to run to enjoy a 55 (!!!!!) degree morning.  Running in the clear cool sunshine just felt amazing, although it is fiiiiinally starting to be almost-tolerable here.  We then met up with a friend I have known for years but only in the virtual sense — from a group I bonded with during the pre-Annabel infertility days.  Happily enough, everyone in the group has at least 2 kids now, and they are all similar ages!  It was so cool to finally meet in person. 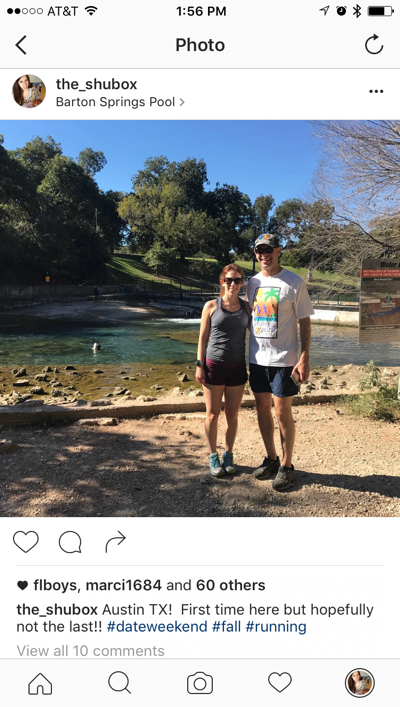 This was followed by lunch with M & family at Salt Lick BBQ.  OMG, y’all.  Such deliciousness.  I felt like I was back in NC only the sauce was a lot thicker and sweeter.  Also there were more options than just pulled pork**.
We spent a while there, just catching up, and then went back to our inn to shower.  We probably could have done something cerebral and cultural, but ended up going toy & book shopping instead.  I will say the large bookstore BookPeople was pretty awesome!  And I ended up getting my next book which I am already 1/3 through because it is awesome: Today Will Be Different by Maria Semple (of Where’d You Go, Bernadette? fame).
Finally we had recovered enough from BBQ to head to dinner, and had a lovely (and mostly vegetarian) meal at Swift’s Attic.  Somehow we even managed to save room for peanut butter cheesecake.  (WORTH IT.)
Sunday:
We slept in somewhat (8 am feels like it esp when it’s really 9 am to me!) and then had to start our journey back, but per Josh’s insistence made one last decadent stop at Gordough’s for donuts on steroids.  I ate half of my pumpkin/ginger snap concoction (which is saying something, this was NOT a normal-sized donut) and still ended up in a sugar coma.   We then headed to the airport for a leisurely ~2.5 hr flight home.  And back to kids!
Maybe it wasn’t as cool as the NY times jaunt, but I had so much fun during our quick trip.  I highly recommend
a) date weekends
b) Austin
c) both A&B!
* Controversies in Dialysis Access, for anyone curious.  And yes, apparently there were heated debates about catheters and instruments and whatever else there is to argue about in the world of dialysis access).
** Not knocking pulled pork in any way — especially with that vinegar sauce! — but the variety was nice.
Share Medicine, the Patriarchy, and My EPIC Inbox