I guess I’m behind!  There has been a lot of fun but little downtime, and phone blogging is not my fave.  (Note to self: need portable keyboard at least!).  However, the 4:30am dawn somehow woke me up this morning and I don’t feel terribly tired (2nd tri energy burst … are you here??) so I’ll try to capture the highlights of the last 4 days!  There was a lot I want to remember. 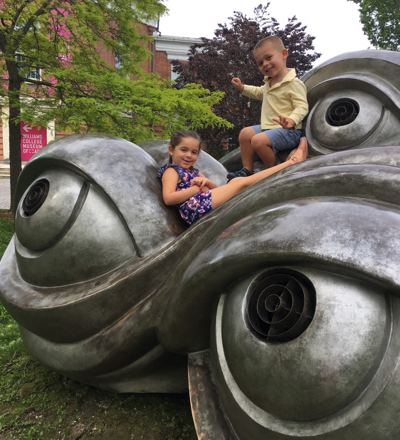 Sunday we left Williamstown, and the kids climbed all over famous sculptures while I had a final catch-up with college friends over coffee.  We then headed to brunch at my former professor’s house!

Williams is pretty tiny (2000 undergraduates) and one major benefit is the relationships that develop between students and faculty.  I got to know Professor Noah Sandstrom in his very early years – he had just graduated from Duke and was getting his start as instructor (he’s now tenured and his wife, also a professor, is Dean)!  I took his (awesome) class called Hormones and Behavior probably in 2000, and clearly it had an influence on my ultimate career path!  I ended up doing a senior thesis in his lab and have stayed in touch since.  They have 2 adorable kids ages 13 and 15 and it was so much fun to see what life is like for them now.  I told them we would be back every 5 years!
From there, we headed to Closter NJ, a northerly NYC suburb where Josh’s cousins live, with beautiful and sophisticated 10-year-old twin daughters.  This was also a really fun glimpse at our (way in) Future Life with Big Kids.
It was blazing hot when we arrived so we started with a swim and BBQ. 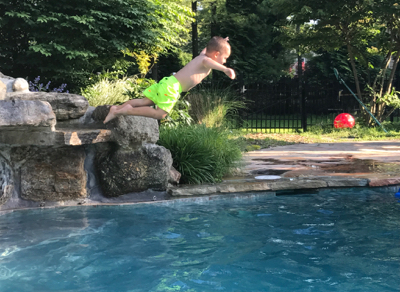 Pretty much perfection.
The next morning, the twins made us breakfast.  Seriously, this dill and feta omelet was perfect!  I am hoping to get Annabel into cooking so I can come downstairs to this in 5 years in my own home (I can dream, right?). 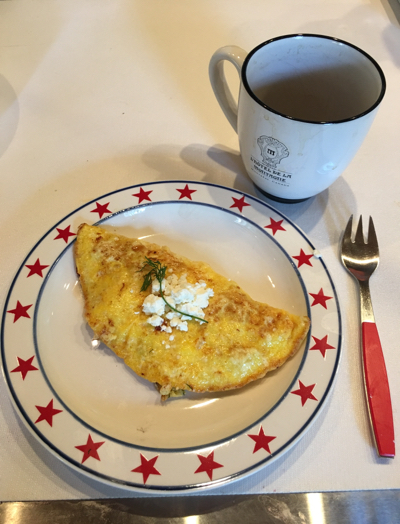 We spent the day tooling around Closter and letting the kids play with everything in their house. 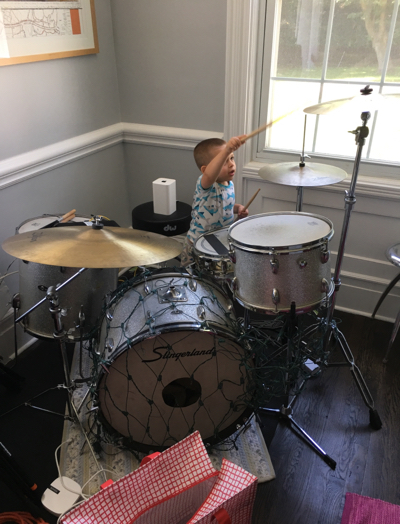 Downtown highlights:  bakery La Tabatiere and a Korean toy store that had some awesome stationery.  Of course I bought several notebooks!! 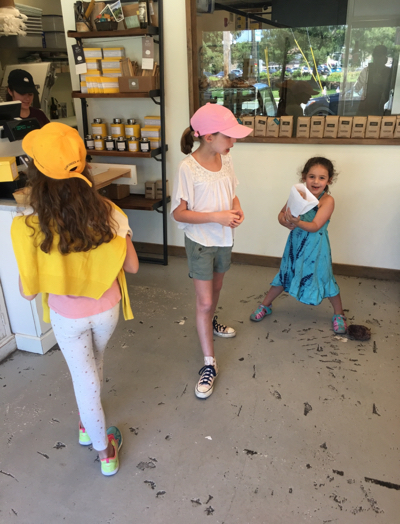 After pastries and stationery and 95 degree heat (woah), we headed to Brooklyn to meet up with Josh’s brother, my SIL, our 2 NYC nieces, and another set of cousins.  We all had a casual Italian dinner together and C experienced his first city bike trip … sort of. 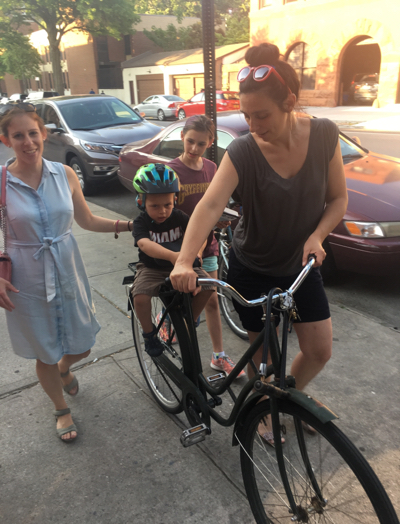 NYC is sooooo not my scene but it was great to see family in their natural habitat when we are used to having them down in MIA!  Unfortunately school was still in session up north (calendar is entirely different!) so we didn’t get to see much of  my nieces.

The younger cousins were still around though and we stayed in their Brooklyn home for 2 nights.  We thoroughly explored the playground scene, and spent the day at MoMATH, a math museum in Manhattan.  It was definitely a little over the kids’ heads but they loved it anyway. 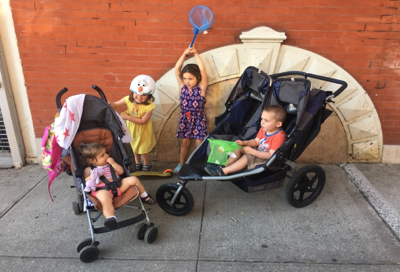 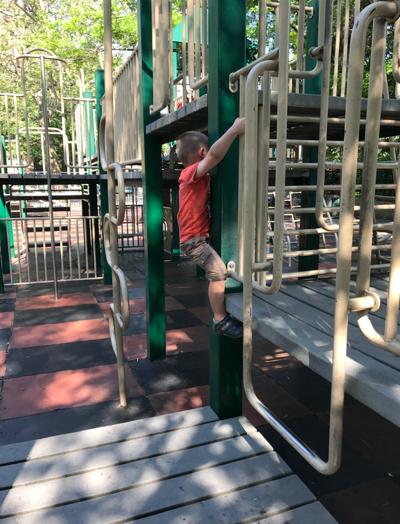 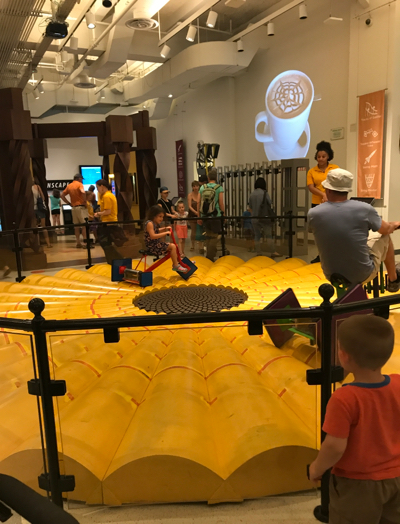 Tuesday night Josh and I headed out for a special treat – his cousins watched A and C while we went out to see Hamilton!!!  I have never seen a single Broadway show but have been playing the soundtrack on repeat for the last year, and honestly the performance was spectacular.  We were riveted and I am still singing the music constantly.
Yesterday we drove to Philadelphia (singing the soundtrack the whole way while the kids watched Wild Kratts on iPads) and spent the day settling in with my parents.  We hit up the playground, had dinner, and relaxed — low key being necessary after all of the prior activity! 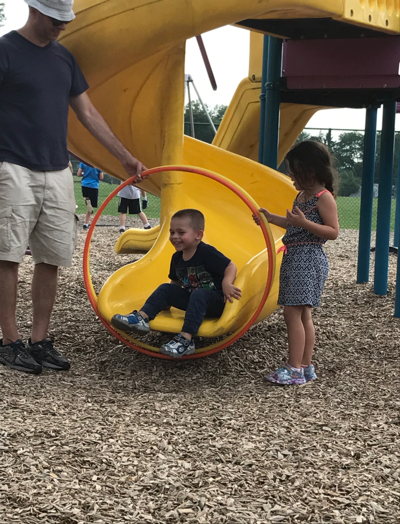 So far, this trip has been a big success!  There have of course been some challenges (whiny kids at times; less than ideal sleeping situations) 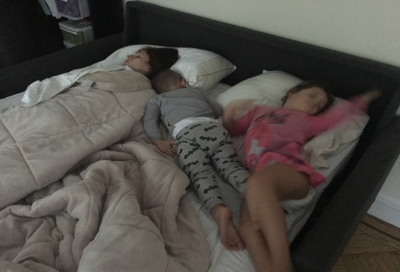 . . . but overall it has been great!  I do think 3 is the magic number in terms of age to make traveling with kids actually enjoyable.  We will probably plan on lying low for the next few years after #3 is born, or plan trips where we bring extra childcare when we do want to go away!  But A and C have been great overall and I can see it only getting more and more fun in the years to come.
All right … onto Day 9!  More to come …